We’ve been running the Matrix Collective Consciousness (MCC) Sessions for 3 months and they have a loyal following. I often get emails from the members telling me about the shifts they’ve had from doing these session.

The MCC is a year long programme with a global healing session and a guest speaker session every month. If you’d like to read more – here’s the link to the MCC membership 2016.

Rather than me trying to decide the topics for our sessions each month, I asked our 221 members to vote on subject that they feel passionate about and want included for the rest of 2016. 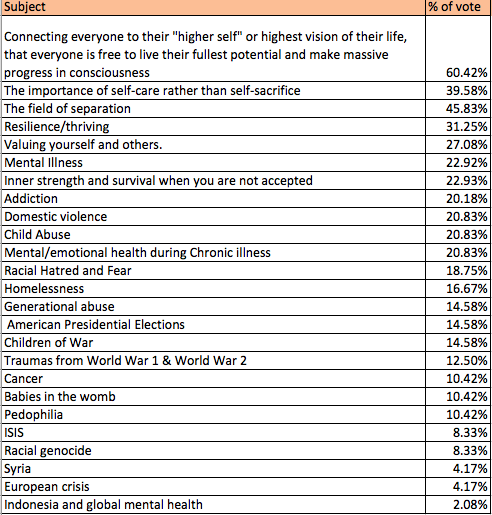 As you can see from the results, the ‘positive’ topics such as ‘connecting to our higher selves’, ‘self-care’ and ‘valuing yourself’ took four of the top five spots.

Of course this is what we want to achieve using the MCC, however as Karl Dawson (creator of the technique) pointed out that it is vital that we focus on the negative first to clear that energy.  Working this way then takes us into the positive reimprinting at the end. Which is how EFT works in the first place. We can’t clean a house without looking in the dark corners first.

So, how can we apply this to the MCC?

I suggest that we start with the opposite of what we want to create.

For example, when it comes to ‘connecting everyone to their higher self or higher vision in life’ we can begin with how it feels to not feel connected, to be dumbed down by life, asleep and just being part of the system without question.

Then we can use the MCC to tap on that, move into the matrix and tap on others (or what ever comes up for you) and then as we clear that we go into the positive part where we do connect in to the higher vision, consciousness for humanity.

As it resonated with so many of you, I’m also going to use some of that wording as part of the positive reimprint when it feels appropriate.

As you know it’s early days with this technique and it feels important to keep trying new ways, new words and asking for your feedback. I’ve set the next few month’s topics and will review it at the end of June – hopefully with some more feedback from you.

Here’s the line up.

Thanks as always for being part of this collective, it’s an honour to take this journey with you.

With much love and creative flow